With Podaris 1.9, we are pleased to introduce a new and significantly improved parametric modelling system.

Podaris focuses on early-stage transport planning studies, and parametric modelling is at the heart of what we do. Previously, early-stage studies had to rely on high-level “rules of thumb” – such as average line speed or cost per kilometer – as the basis of their cost/benefit calculations. We now offer a better way.

The problem with rules of thumb

“Rule of thumb” have been necessary because there is no time or budget to do detailed engineering, especially during the early stages of project planning, when many different scenarios need to be evaluated.

These simplifications, however, can become quite problematic. Too often, seemingly small details of the site or the engineering turn into major difficulties later. At the Berlin Airport, an early-stage misconception about ventilation shafts turned into a €5 billion cost overrun. On the California High Speed Rail project, an early-stage misconception about right-of-way costs turned a $10 billion project into a $60 billion project.

So even for well-understood types of infrastructure, over-simplified rules of thumb can produce wildly inaccurate results. And what about infrastructure that isn't yet well-understood? What rules of thumb would you use for planning a hyperloop or an autonomous bus network? Without a good answer to this question, new technologies are even harder to implement than existing technologies – which are already hard enough!

Podaris solves this problem with advanced parametric modelling tools. These tools are intuitive enough for planners to use, but also well-grounded in the engineering parameters of the systems they represent. In this way, planners can draw simple lines on a map, and the resulting right-of-way footprints, turning radii, travel times, and so forth are calculated dynamically, providing far more accuracy than anything that could be achieved via simple rules of thumb. This enables planners to experiment more freely, without fear of violating engineering constraints.

When we launched Podaris, our immediate aim was to create a system that provided real-time collaboration on parametric models, with a highly intuitive interface. The parametric modelling techniques we used were good, but still came with the caveat that the generated infrastructure pathways and travel-times should be treated as indicative, rather than literal. We were aiming for an accuracy of plus or minus 5% – a huge improvement over old-fashioned rules of thumb, without the complexity of full-blown engineering calculations.

This was already a significant improvement over earlier transport planning techniques – but it wasn't good enough for us. Our longer-term aim is to provide full-fidelity parametric modelling, in order to seamlessly integrate with third-party BIM (Building Information Modelling) design and engineering tools. This will minimize the discontinuities as a project moves from conception, to construction, to operation. Unfortunately, the simplifications in our modelling system meant that such a discontinuities would still occur. It was an improvement over how planners have worked in the past, but we aspired to do better than that.

So with the release of Podaris 1.9, we've re-written our modelling system from the ground up, with a methodology that will ultimately allow us to achieve full physical accuracy, ensuring no discontinuities with later-stage engineering models.

Now, the infrastructure paths automatically generated by Podaris come with associated velocity profiles that accurately calculate the velocity, acceleration, and jerk tolerances of the chosen infrastructure type. These travel-times are now accurate to within 99.9% (given a few limitations discussed below). We've been able to do this without making the modelling process any more complex. Your existing Podaris projects have been automatically upgraded, so you shouldn't notice any disruption.

These velocity profiles can be revealed by setting the display options to color paths by velocity. Here, for example, you can see the automatically-generated velocity profiles of trains in the London Underground: 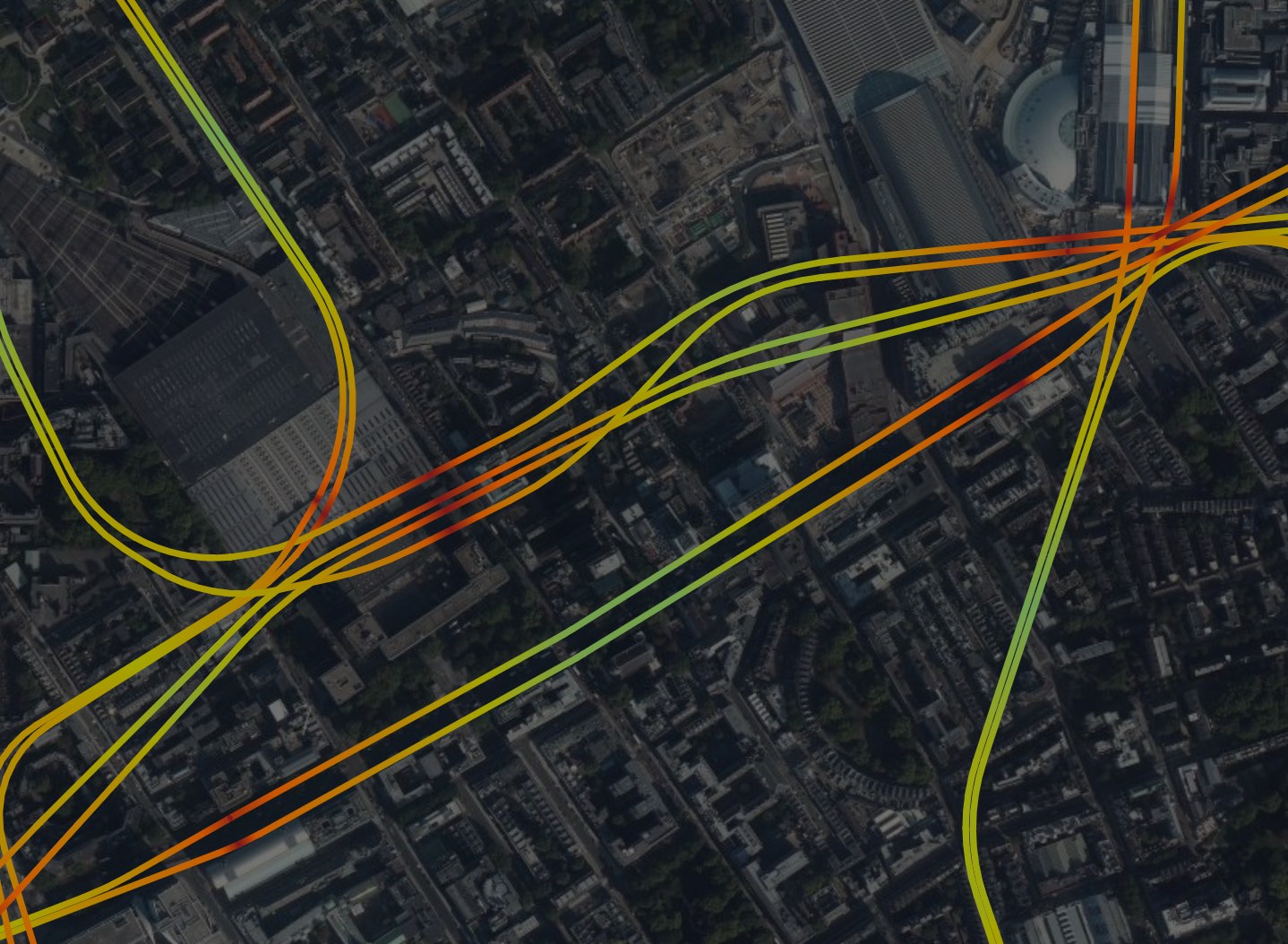 In keeping with Podaris’ ethos of providing real-time feedback wherever possible, velocity profiling is fast. As you move points and lines around, you will immediately see the effect on line speed. This allows planners to gain an intuitive, almost visceral understanding of engineering-driven capabilities and constraints of the infrastructure they are working with.

Podaris can now model the characteristics of individual transport systems with a very high degree of fidelity – if the infrastructure type is accurately defined. But this raises a question: as a transport planner, how do you know that you're using the right parameters?

To address this, we have begun to work with several transport systems vendors to provide validated parametric models of their technologies. The first of these partnerships will be announced next month. This will provide our customers with highly-accurate, vendor-certified modelling capabilities, allowing transport planners to work with greater speed and confidence.

Of course not every aspect of a transport system can be captured in a parametric model. Human judgement – from a variety of disciplines and perspectives – will always be necessary. That's where Podaris’ collaboration capabilities come into play. If a planner encounters a scenario where which the parametric modelling doesn't provide the answer, they can instantly add the systems vendors or engineering sub-consultants as collaborators, and everyone can then work together within Podaris.

There are still some limitations to Podaris’ modelling capabilities:

Finally, it's worth noting that the the interoperability that we are aiming for with BIM and microsimulation systems will also be extend to GIS, cost-modelling, asset management, and many other types of software.

Next steps for Podaris

Going forward, our two major areas of focus will be working with transport technology vendors to incorporate their parameters into Podaris, and developing capabilities for scheduled services and road-based modes, so that we can properly model trains and buses.

Both of these initiatives are well underway, so it won't be too long before the next major update. In the meantime, we hope you give Podaris 1.9 a try and let us know what you think!