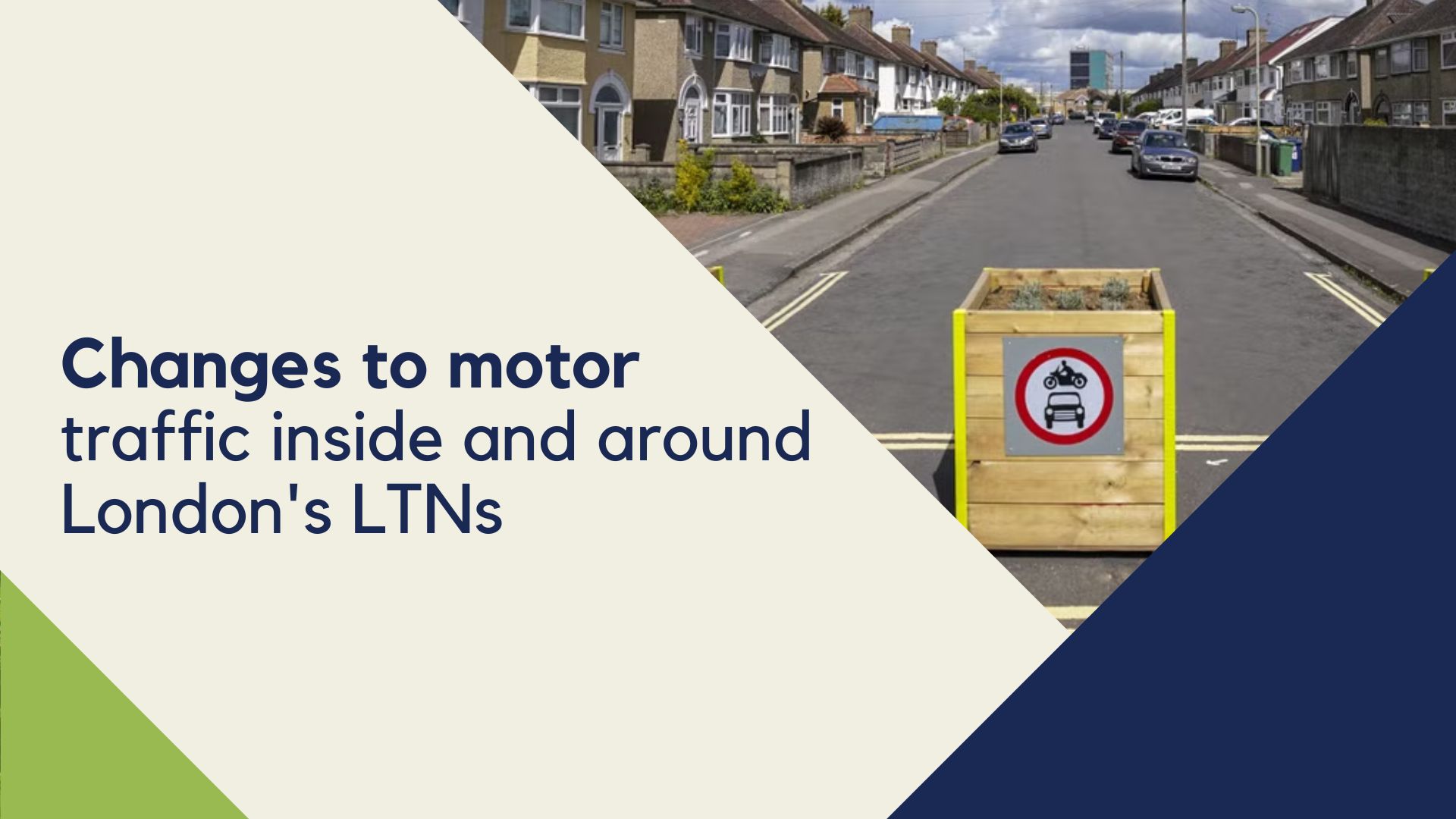 The University of Westminster's Active Travel Academy and climate charity Possible have released their initial findings into the effects of “Low Traffic Neighbourhoods” (LTNs) this week, demonstrating a decrease in motor traffic in LTN areas, with little discernible impact on adjacent “boundary roads”. In fact, the study observed a less than 1% increase on the daily mean average of traffic through these LTN-adjacent roads.

For LTN areas themselves, there was a mean reduction of 46.9% traffic, and some evidence for the kinds of qualitative change in walking and cycling experiences consistent with prior research into active travel and LTNs.

The most comprehensive review of LTNs to date 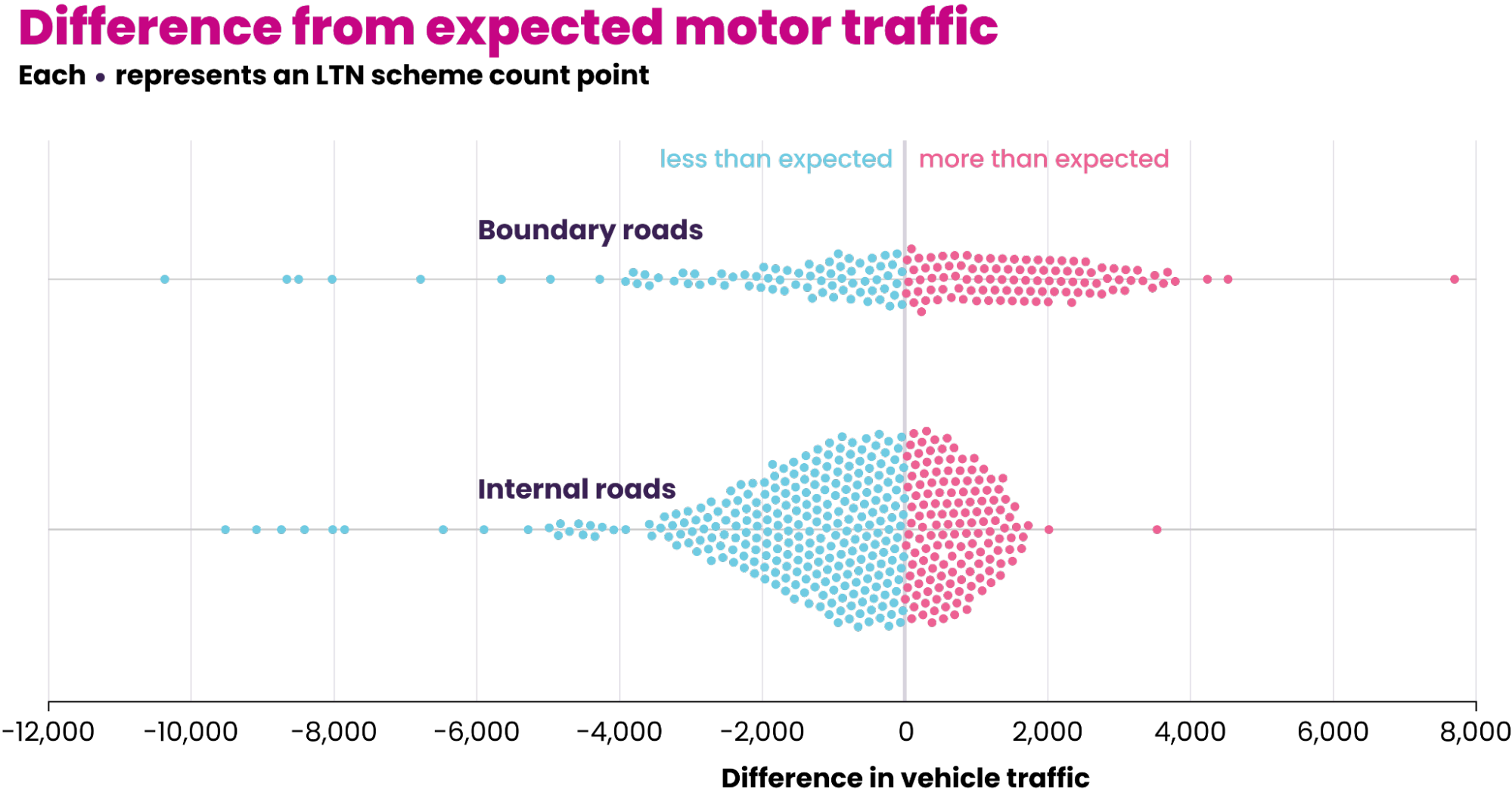 The study analysed data on changes in motor traffic inside and on boundary roads of 46 LTNs across 11 London boroughs, comparing actual changes to background changes in traffic levels across London functional zones (Central, Inner and Outer). The study concludes that the mean average decrease of motor traffic on LTN roads was 10x that of the average increase of traffic on boundary roads, adjusting for background trends. The benefits, in terms of traffic reduction, can be understood to extend more widely than LTNs.

Possible's Hirra Khan Adeogun describes the impact of LTNs in what is the first systematic review of them to date as being verifiably positive for those living in them. Possible call for continued development of LTN schemes and efforts to combat the misinformation associated with their impact on boundary roads.

It is worth noting that despite 46 schemes being analysed, a further 50 were deemed unfit for study on account of the lack of associated monitoring data. That is, spatially located traffic count data for at least one count point for both ‘pre’ and ‘post’ intervention months. Consequently, the study calls for the collation and sharing of this type of data by both regional and national authorities in order to better analyse the impact of interventions in the future.

Even where data was readily available for meta-analysis, the quality and lack of consistency of data types has inevitably complicated both data collection and analysis for the researchers. In Hackey, for example, “monitoring reports varied from short summaries to much more detailed reports incorporating analysis of consultation responses, discussion of wider literature etc. Mostly, [Automatic Traffic Counters] (ATCs) were used although in some cases the borough used machine learning sensors.”

Extracting data was also occasionally complicated by it being presented in graph form, as opposed to being tabulated. Difficult, and time consuming to extract (not to mention putting those who use screen readers at a disadvantage). Once all data that had met the minimum standard had been gathered however, it was entered into spreadsheets and a GIS file linked by internally generated count point IDs.

It's clear that, as the document summarises, more “public sharing of pan-London traffic count data” (and data that is consistent in quality and type across boroughs) is necessary to inform future decisions around LTNs. Making this sort of data readily available will allow researchers to use collaborative transport planning and analysis tools like Podaris to rapidly explore not only the impacts of current schemes but appraise variants and generate high-level indicative outputs around everything from demographic impact to travel times.

These tools exist to liberate data and not only accelerate the meta-analysis of quantitative data but also gather qualitative data on the same platform, in the same project by means of digital consultation. Head over to podaris.com to take a look at how we're unlocking the potential of transport data today to do just this, or schedule a demo now to see it for yourself.