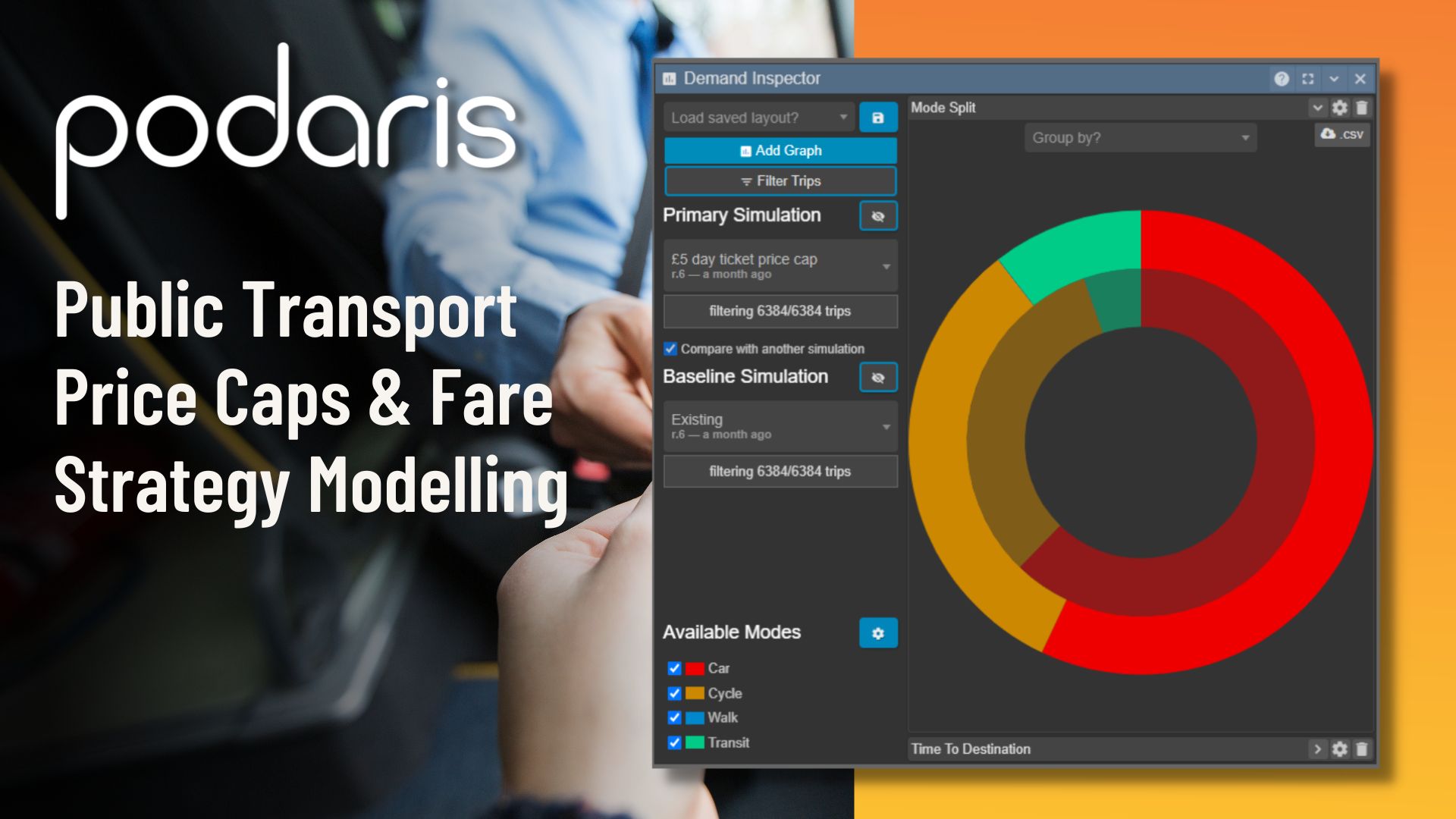 The effects of the UK's cost of living crisis are as numerous as its causes. While factors such as the pandemic, chip shortages and the supply chain crisis have had serious implications worldwide, the rising cost of living in the UK has become a daily feature of the news cycle. According to the Office for National Statistics, 77% of people over the age of 16 polled in Great Britain between April and May this year reported feeling “very or somewhat worried about the rising cost of living”. 50% claimed to be worried “nearly every day”.

Alongside the soaring cost of energy, one of the most significant rises in terms of typical household spend within the UK has been on transport. At the start of March, rail fares rose by 3.8%, prompting the suggestion that commuters could see average fares rise to 48.9% more than they were in 2010.

A governmental pledge this August to keep the rise in regulated train fares in England below the rate of inflation is the most recent intervention aimed at keeping rail viable for travelers in the UK. Regulated fares account for around 45% of all fares and include season tickets for the majority of commuter journeys, certain long distance off-peak tickets, anytime tickets around large cities and saver returns.

In April, The Government launched a one-off ticket sale, dubbed ‘The Great British Rail Sale’ alongside 19 operators offering discounted fares for over a million tickets on journeys across England, Wales and parts of Scotland. Despite savings of as much as 50% available to customers during the sale, only 1% of journeys taken were likely to be effected by it - with commuters and families travelling for half-term holidays not likely to benefit.

When contrasted with recent fare strategies across Europe, The Great British Rail Sale was rather unsurprisingly greeted with muted enthusiasm. By comparison, Germany's €9 monthly fare for unlimited bus and train travel, introduced in June, resulted in 31 million tickets bought in the first month alone. The scheme has been widely adopted in travel to rural and tourist destinations, and greeted warmly as a measure to redress rising consumer costs. The Association of German Transport Companies (VDV) concluded that at the end of the three month experiment, 1.8m tons of CO2 emissions were saved.

In Spain, travel across the state-owned rail network, Renfe, became free from September until the end of 2022. This is in addition to a 30% discount on all public transport, including metros, buses and trams announced in June. Similar initiatives exist in Austria with its €21 per week annual rail pass and Estonia's capital Tallinn, which has boasted free public transport since 2013. Such is the novelty of Luxembourg's entirely free public transport (inclusive of buses, trains and trams) that the government's website delightedly reassures visitors that “yes, you read it correctly, it’s “free”!”

A less rosy picture of rail travel is found back in the UK, where strikes, fare hikes and emergency timetables dominate headlines. COVID recovery has proven a significant challenge, with the commuter market at 56% of its pre-pandemic numbers. Flexible season tickets were created to address new hybrid working patterns but their uptake has been slow, perhaps owing to their limited value in certain scenarios (e.g. when using normal season tickets on longer commutes).

In the UK, one fare strategy making headlines is the proposed £2 cap for single bus tickets outside of London. The Transport Secretary announced in September that £60m will be earmarked by the Government to support operators by capping single adult fares at £2. The initiative will see passengers saving 30% on the average fare. While the scheme is set to run nationwide between January and March 2023, Liverpool City Region, Greater Manchester and West Yorkshire have already introduced the £2 cap early, using BSIP funding to support it for three years.

So how can operators, authorities and others gauge the potential benefits of introducing price caps across their regions? While tools exist for generating indicative outputs, many require overnight, computationally expensive simulation runs, and operate exclusively as desktop applications.

Podaris breaks this paradigm by bringing demand modelling into the cloud, offloading simulations to our server where comparative fare strategies can be modelled and assessed in minutes. In our last post, we introduced our new demand modelling engine, the latest tool in Podaris’ transport planning and analysis platform. The demand modeller makes it possible to generate outputs such as mode shift, mode split and transit ridership, with ease.

We explored the effects of implementing a £5 cap on bus networks within Manchester using Podaris. In order to do so, we first ingested route data from Stagecoach for the region, and imported a regional dataset containing Middle Layer Super Output Area (MSOA) level census data from 2011.

From here, we set up an archetype in our Demand Manager (a profile used to calculate travel demand preferences) with a generalised value of time of 9.95 per hour (derived from WebTAG values for commuting) with the following penalties set up to to reflect the cost of car fuel and the existing £6.40 multi-operator day ticket:

Our second archetype, representing a £5 day ticket price cap sets our half a day ticket value as £2.50.

Next we set up demand scenario trip definitions, for both ‘to work’ trips and ‘from work trips’, starting at 7:30am and 16:30pm respectively, setting car, cycling, walking and transit as possible modes of travel. Each demand scenario will simulate trips between each MSOA and every other MSOA in Manchester. We set a calendar day (Monday, here) and a sample size (the number of trips to simulate) and run our simulation. 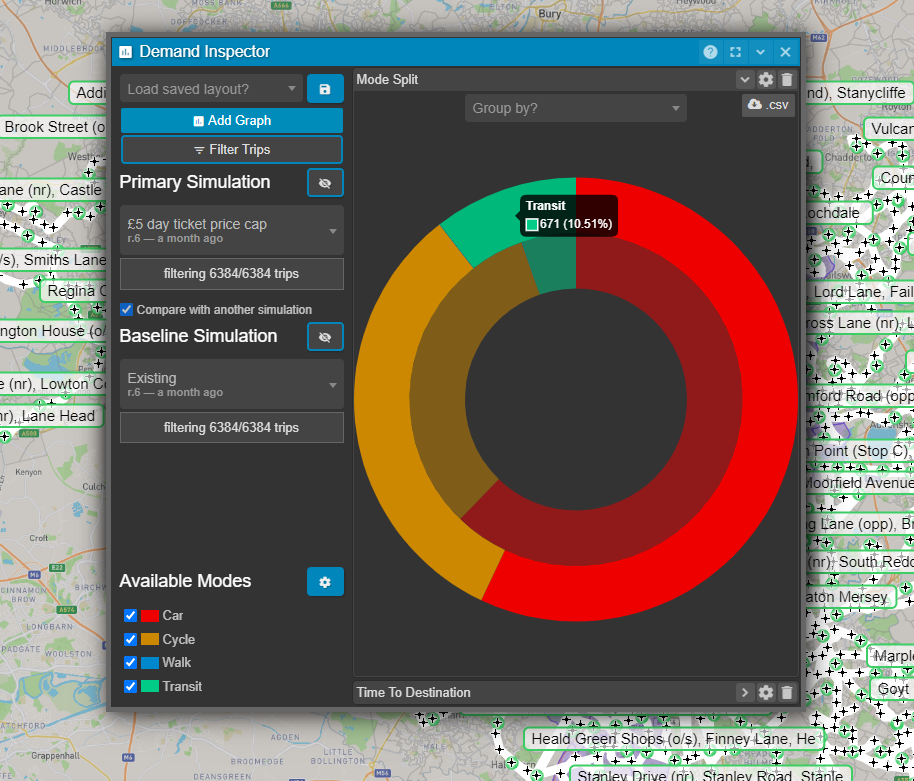 Once simulated, a variety of graphs can be produced from the outputs instantly, and crucially, simulations can be compared to better understand the impact of comparative scenarios. We can immediately see the larger share of transit based ridership (represented in green in the outer circle) resulting from a £5 price cap, versus roughly half that number when compared with the existing £6.40 multi-operator day ticket as an option.

The ability to set up and run multiple simulations in minutes, allows a wide variety of scenarios to be explored rapidly, when plans are still fluid. Of course, the demand modeller is just one facet of Podaris’ planning and analysis platform and is deeply integrated into its service scheduling and route planning toolkit, meaning that route alterations can be planned rapidly and collaboratively and the impacts of these changes incorporated into future simulations.

To see how Podaris’ tools can help you plan faster, better and more accurately, get in touch and schedule a demo with us today!