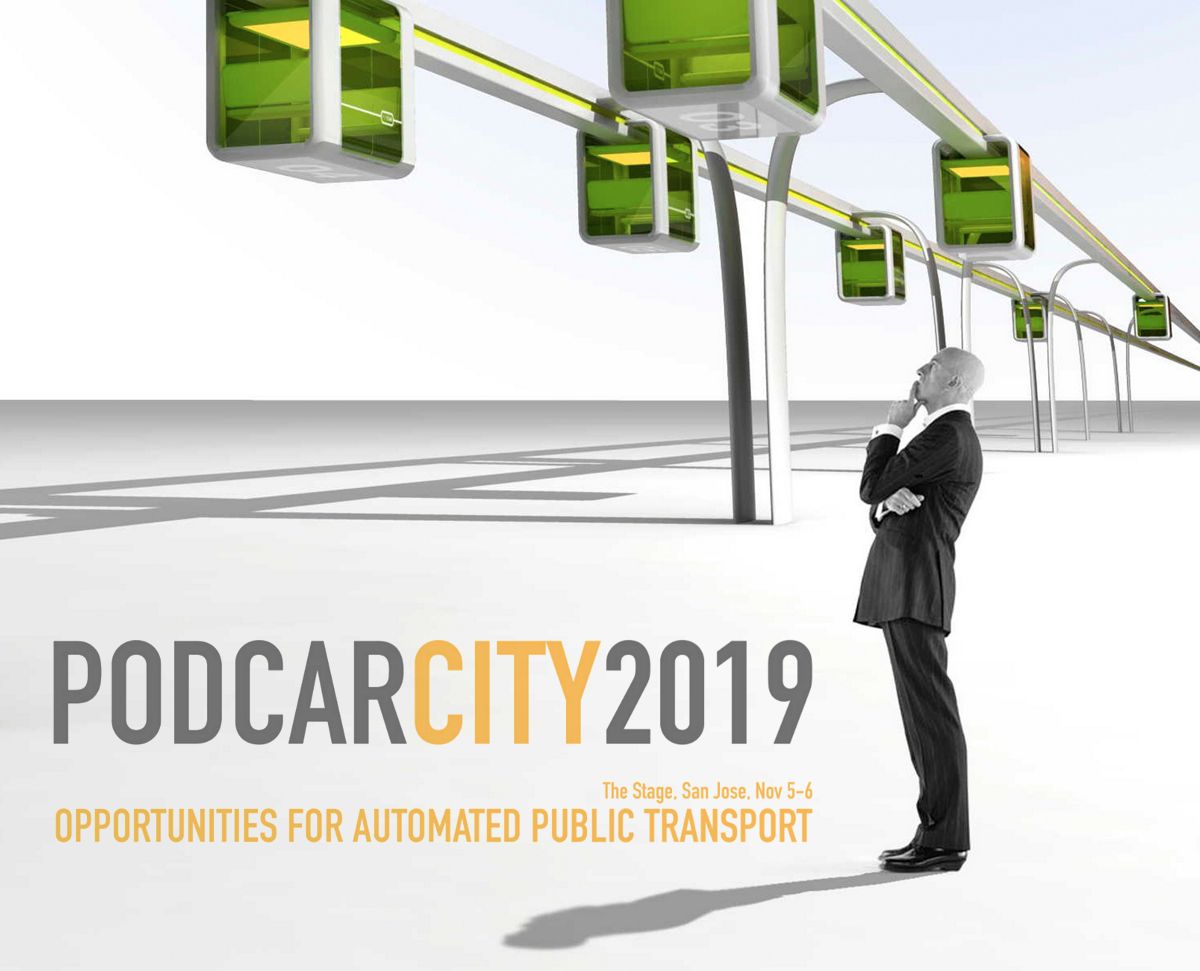 Podaris will be exhibiting at the 13th annual “Podcar City” conference, in San Jose, California. Come visit our booth on November 5th and 6th, and meet our CTO, Devon Barrett.

So, what is a “Podcar”, and why does it sound suspiciously like “Podaris”? Glad you asked! As it turns out, Podaris owes its origins to Podcars! Before explaining that history, however, let’s understand something about the history of Podcars themselves.

“Podcars” are an emerging class of transport technologies with the following attributes:

Podcars — also known as Personal Rapid Transit (PRT) for more taxi-like systems, or Group Rapid Transit (GRT) for more minibus-like systems; or, collectively, as Automatic Transit Networks (ATNs) — have been an “emerging technology” for a long time. First proposed in the 1950s, the first public ATN network began operations in the late 1970s at the University of Morgantown, West Virginia, in the late 1970s. 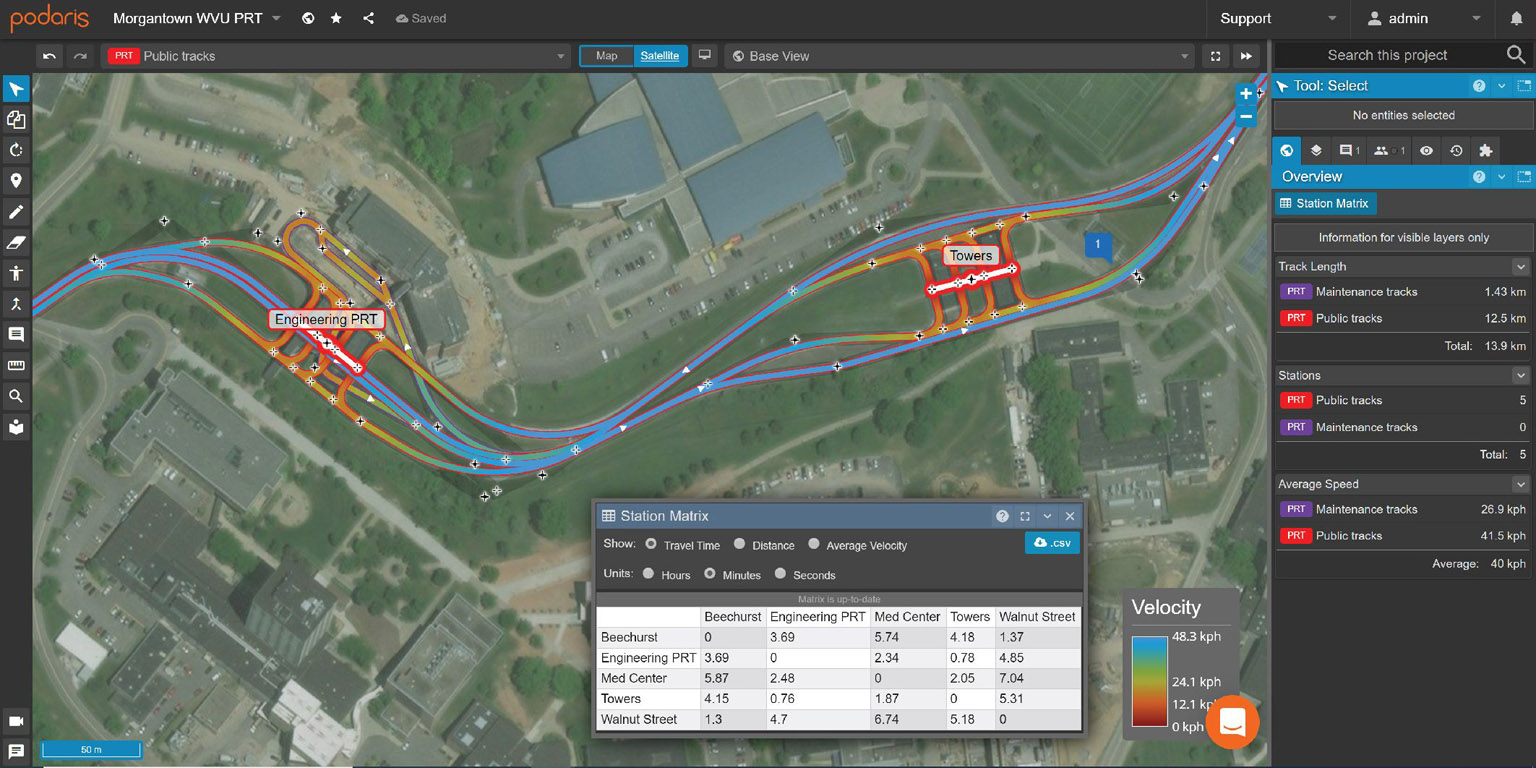 Explore the “Morgantown PRT” — technically, it's a GRT — in Podaris:Engage

Morgantown was an experimental system, and although it has been highly successful — carrying tens of millions of passengers — nothing else like it was built for decades. (There were many other Automated People-Movers (APMs) built, of course, but these were line-haul systems which featured much larger vehicles that stopped at every station. ATNs are different to APMs in that they can form branching networks, with small vehicles providing point-to-point service.)

In the late 1990s, there was a resurgence of interest in the technology. In 1999, 2getthere, based in the Netherlands, began operating a small GRT system at a business park outside of Rotterdam. This system is currently in the process of being modernized and expanded.

In 2010, 2getthere opened a PRT system at Masdar City in the UAE. This was followed shortly thereafter by a UK company, Ultra Global PRT, launching the Heathrow Pod, and a Swedish/Korean company, Vectus, launching the Sky Cube in Suncheon, South Korea

These systems made a big impression on people, as you can see in this “Fully Charged” video from 2012:

But since then, no further Podcar systems have opened to the public. Why not? What happened? What is the future of this technology? And what does this have to do with the origins of Podaris?

At the time, Podaris’ founder, Nathan Koren, worked as a transport planner specialising in ATNs. He led feasibility studies in 14 countries — but, frustratingly, none of these came to fruition.

“I could see that there were some very significant barriers to this kind of innovation," says Nathan, reflecting on the difficulty of building new Podcar networks. “And I had to ask myself: were those challenges in fact insurmountable? Or were we just missing some pieces of the puzzle?" He concluded that it was the latter — and that missing puzzle piece is what eventually became Podaris.

The key challenge Nathan identified was this: Podcars are a genuinely “disruptive” technology, rather than a simple incremental innovation. They aren't just an elevated car, or a downsized train, or an automated bus. They’re fundamentally different from all of those things. To successfully build a Podcar system, therefore, requires understanding new types of vehicles, new types of infrastructure, new types of control systems, new network design principles, new station design principles, new operational principles – even new ticketing principles and new types of business cases. All of these new things needed to be developed both correctly and simultaneously — with that understanding distributed among many different disciplines: planners, engineers, architects, policymakers, property developers, transport operators, and so forth — otherwise the project would fail. This is very difficult to accomplish!

The Podcar projects in the early 2010s were successful because they were very limited in scope. They were small pilot projects with a single landowner / client. The Podcar technology vendors — who intimately understood the key parameters of their technology — were able to exert tight control over every aspect system planning, engineering, and operation. But when larger, urban-scale systems were attempted, it became necessary to bring in 3rd-party planners, engineers architects, landowners, policymakers, property developers, transport operators, and many more. Unless all of these stakeholders could mutually agree on exactly what they were doing, the project would fall apart.

Nathan saw that it was virtually impossible to get all these stakeholders to agree on what they were doing — for the simple reason that they literally couldn’t see what they were doing. Each of the different agencies and disciplines used different software tools for planning, engineering, and simulation. These tools were all incompatible with each other, offering no visibility between — for example — planners, engineers, and transport operators. Furthermore, none of these tools had built-in way to accurately model Podcar technology. Individual disciplines would attempt to “hack” Podcar functionality into their own tooling, with varying levels of accuracy and success. Discrepancies between these models would lead to snowballing problems in the project — often from the earliest days of concept development.

To solve this problem, we created Podaris, which solves both of these problems above. It’s a collaborative cloud-based platform, with clients that can run in any web browser. That makes it easy for all the different agencies and stakeholders to see what each other are doing, and come to agreement. And with its parametric modelling capabilities that can be fine-tuned to accurately model the attributes of any transport technology — with those attributes validated by the technology vendors themselves — nobody needs to develop their own hacky, incompatible interpretations of how Podcars work. We’re even working on plugins that will keep everyone’s existing desktop applications in sync with their Podaris models, bringing these benefits to the whole ecosystem of planning and engineering tools.

Podcars were the first type of transport system that could be modelled in Podaris. But as we built our platform, we found that the problems we were addressing — interdisciplinary collaboration and divergent modelling techniques — actually affected every type of transport system, including well-established technologies like buses, trains, and even cycle paths.

For better-established technologies, there’s more of a shared understanding to begin with, so these problems rarely kill projects outright. But they often cause significant delays and cost overruns. The problem is serious and general enough to be worth solving across the whole of the transport industry. So for the last few years, although Podcars have remained a nascent, still-emerging technology, we’ve mostly been focused on extending our modelling capabilities to become fully multi-modal. We’re also getting very excited by other emerging technologies such as electric bikes and scooters and other forms of micro-mobility, and look forward to supporting those.

Podcars, however, have always remained close to our heart. So what’s been going on with them?

Until recently, not a lot. In addition to the issues that we identified above, Podcars faced another challenge: competition from the seemingly imminent arrival of driverless cars — autonomous vehicles (AVs). At first glance, it appeared that AVs would offer much of the functionality of ATNs — on-demand, automated mobility — without requiring any specialised infrastructure. So why invest in expensive Podcar infrastructure, when cars would shortly be driving themselves anyhow?

For much of the last decade, the hype surrounding AVs became a significant deterrant to interest in Podcars. But over the past year, the driverless car bubble has started to burst. Most people in the industry now realize that full-blown generalized autonomy is still a very long ways away. Moreover, it has become increasingly clear that it won't be as simple as simply replacing human drivers with AVs, without paying attention to how the transport network or the built environment is structured. How will driverless cars interact with cyclists, pedestrians, and with multi-use environments? What happens to road congestion when the networks are full of zero-occupancy vehicles repositioning themselves, or circling the block while their owners grab a coffee?

A growing understanding of the implications of driverless cars has led many to the realization that whenever and however AVs finally happen, they won't be a get-out-of-jail-free card for the avoidance of investment in transport infrastructure. If anything, the opposite is true. AVs will need to be tightly regulated in many cases: banned from some areas, and mandated in others. Many people in the industry have suggested that the potentially negative effects of AVs can be mitigated by carefully structuring their interactions with other modes — in many cases, keeping them segregated — and by operating them as a well-coordinated, public, “Mobility As A Service”, rather than as autonomous self-maximizing agents for individual owners.

And with that, the narrative for AVs has circled back around to something that looks increasingly like Podcars. The discussion is no longer simply about vehicles alone. You can't avoid investing infrastructure. You can't avoid thinking about the design of the whole system. So the gap between AVs and Podcars has narrowed considerably, and the former is no longer a credible argument against the latter.

At the same time, many of the impressive innovations that have been developed for driverless cars over the past decade — sophisticated neural networks; cheap LIDAR sensors; protocols and standardized hardware for vehicle-to-vehicle communications — are making it easier and cheaper than ever to implement Podcar systems.

All of this seems to be converging in a sudden resurgence of interest in Podcars. We've been in a unique position to observe this happening, because much of this interest is being enabled by Podaris — just as we'd always hoped. One of our very first customers, Colorado-based PRT Consulting is perhaps the world’s best-known and most accomplished consultancies in this area. They now use Podaris to do all of their ATN feasibility studies, and tell us that it has revolutionized their business. They have customers around the world, including some very exciting projects that we can’t talk about, but are thrilled to see moving forward. 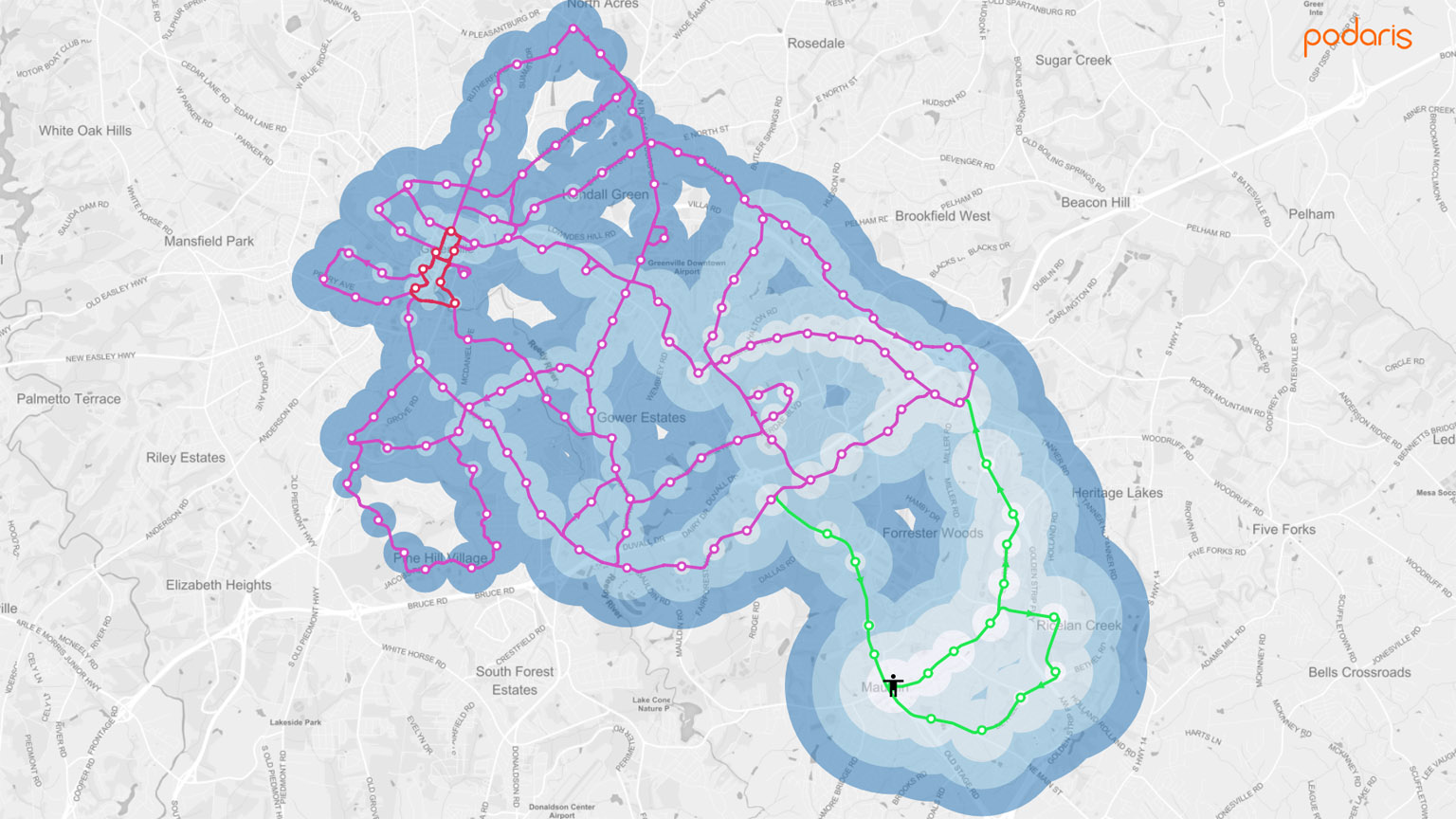 Another one of our customers, Modutram, is an exciting new ATN technology vendor, based in Mexico. They use Podaris to do concept development for their clients. We’ve also worked with them to develop a translator for their in-house microsimulator, meaning that they can do high-level planning in Podaris, and then quickly get detailed validation of system performance. 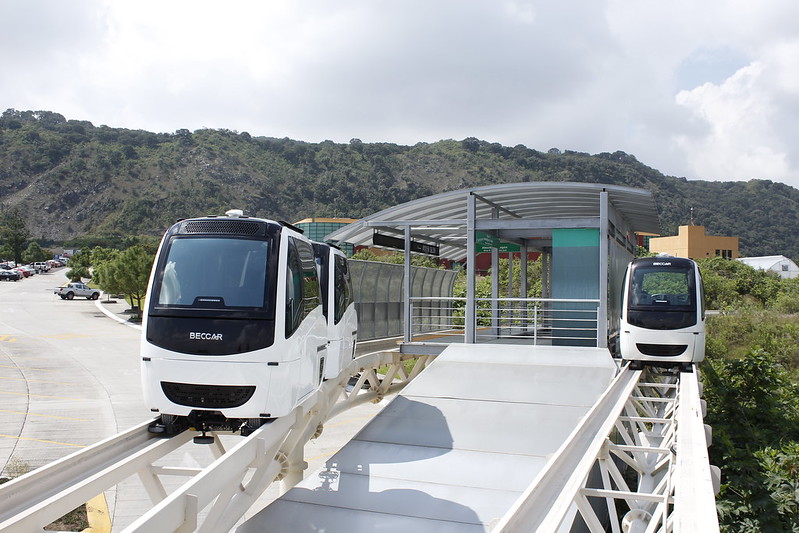 In France, Supraways is another one of our customers that has been using Podaris to do concept development and engage with their stakeholders. Check out this video, which features a lot of developed-in-Podaris plans in the second half. We’re really happy to see the kind of traction that they’re starting to get in France.

We have a number of other customers that we’re not even allowed to identify, but they are using Podaris to develop some really spectacular Podcar projects. We can’t wait to see those publicly announced! In the meantime, it’s gratifying to see that our long-term aim of catalyzing and supporting this kind of transport innovation appears to be bearing fruit.

Well, that was a long blog post. Don't forget to visit us if you're in San Jose this week!